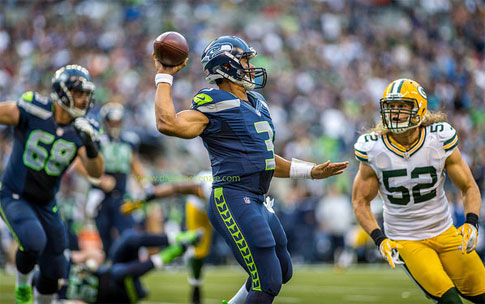 As we dig into the 2014 Quarterback Rankings for the upcoming season, we’re always reminded of the fact that the NFL has not just become more of a passing game, but they’ve officially hit the turbo button. We’re seeing passing efforts like we’ve never seen before, and it doesn’t look like there’s a slowdown in the near future.

Peyton Manning set the NFL record for passing touchdowns in a season (55), blowing away Tom Brady’s mark by 10 percent. Manning also eclipsed Drew Brees’ passing yards record by ONE YARD, throwing for 5,477 yards in his Age 37 season. From a Fantasy points perspective, Manning scored 487 Fantasy points, which was a record for quarterbacks – 29 more points than Drew Brees in 2011 and 33 more points than Brady in 2007. Interestingly enough, Brees also scored 425 points last season and 418 in 2012.

Evolution of the Passing Game

Every season, we hear about how the passing games are getting better and better, which makes Fantasy owners think they have to draft quarterbacks earlier than usual. I’m hear to try to dispel that rumor. Certainly, Manning’s 2013 effort was first-round worthy, and if we could go back in a time machine, we’d draft him first overall, then grab Knowshon Moreno and Josh Gordon on the turn in Rounds 2 and 3. We’d also pick up Julius Thomas and Zac Stacy in the final rounds, and we would destroy the world! (We’d also make some futures bets on the Seahawks.)

But we’re not drafting 2013 Manning – we’re drafting the 2014 version of the future Hall of Famer. Without question, we still like him to be the best Fantasy producer at his position. But do we expect him, in his Age 38 season, to repeat his 2013 numbers? No. He loses Eric Decker and Knowshon Moreno, and has a few more changes affecting his game. Plus, guys like Brees, Aaron Rodgers, Andrew Luck, Matt Ryan and Tom Brady have reloaded and are expected to be healthy again.

You have to compare Manning to the worst projected Fantasy starter in a 12-team league, which means, the 12th quarterback. Then you can get a better understanding of his value compared to the top running backs ranked against the lesser starting RBs.

Many More Men Behind Manning

Last season, there were 14 quarterbacks that scored over 300 Fantasy points. Compare that to 10 in 2010, eight in 2007 and 2004, and it’s clear that the position is getting better at the top – but the middle and back ends are moving up incrementally, also.

Did you know Bengals QB Andy Dalton scored the third-most Fantasy points for quarterbacks last season? Manning, Brees, then Dalton – all scored more than 350 points. The Ginger Ninja officially has your attention!

So if those lower echelon Fantasy starters are scoring 300 points, then drafting a 350-pt QB early is less of a smart idea. It’s like when you bring your 6-foot-6 friend to play basketball with you, but you find out your opponents brought a couple 6-foot-4 guys. Your tall buddy’s going to be good, but he’s probably not going to dominate in the paint like he would have against the 5-foot-11 guys that played last week.

Remember that we always do our rankings using standard scoring, non-PPR, in 12-team leagues, with 4 points for a passing touchdown and minus-2 for interceptions. Note: I talk a little more about specific quarterback rankings this season over at FantasySports.About.com.

Russell Wilson won the Super Bowl in his sophomore season, and now he gets a healthy Percy Harvin for his junior season. Photo Credit: Drew McKenzie

Are you ready to roll the dice on a quarterback in the early rounds? Or are you ready to wait a bit, add depth at running back and wide receiver with those early picks, then grab a mediocre Fantasy starting QB in these 2014 Fantasy Quarterback rankings, like Russell Wilson, in the middle rounds? I vote the latter!