Your time machine just took you to March 20, 2015, where we’re about to hold a 2015 Fantasy Baseball Mock Draft with 12 writers from across the interwebbernet. (That’s what we call it in the future.) Unfortunately, you’re only able to stick around for the first four rounds (because you have to avoid meeting your grandchildren’s grandchildren, who are on their way to this conference room, right now!)

How can this mock draft from the future help you? You’ll get a sneak peek on what we think the best keepers are for the year 2013. (Remember 2013!?! That was awesome. I still can’t believe Adam Sandler won an Academy Award.)

Knowing who the best players are in 2013 is pretty easy – you just think back six months to 2012. But in order to look ahead to 2015, you have to think differently. You have to calculate stats and project numbers and understand physics, depreciation – and Spanish.

You have to be part cyborg.

If you look back, you can look forward. Here’s our 2014 Fantasy Football Mock Draft that we held in 2012. I can’t wait to see the Jets trade for Jonathan Stewart!

Now, put away your computers and enjoy this mock draft. That’s right — where we’re going, we don’t need computers! … Seriously, though, keep your computers. You do, in fact, need them in the future.

So why Harper over Trout first overall in #Mock2015? Goes back to prospect status pre-2012. Had Harper higher then, sticking to that eval.

#Mock2015 1.04 G Stanton, OF, BOS – Stanton looks great in the heart of Boston's order after selling the farm for him http://t.co/JDyZGSqevu

I select Rockies SS Troy Tulowitzki in #Mock2015 Future HOF'er has put all injury concerns to bed the past 3 seasons http://t.co/wBqbKFCVwQ

With the 1st pick in the 2nd round of #Mock2015 I select the defending NL ROY Marlins OF Christian Yelich. http://t.co/wBqbKFCVwQ

@davidgonos holding #Mock2015 fantasy baseball draft: http://t.co/tv01SoC6tb At Pick 2:7, having trouble b/c of others' silly picks. … 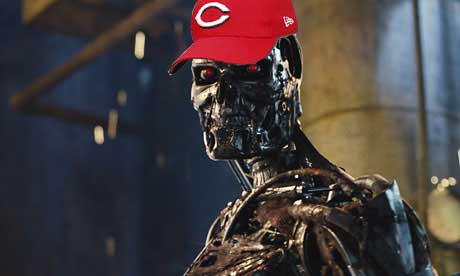