So when we say you should pay close attention to your scoring, this is specifically one of those instances. It’s easy to compare other positions because everything comes in one-, three- or six-point increments, like yards, receptions, extra points, field goals and touchdowns. Sure, there might be some small differences in those stats, but for the most part, all offensive guys are analyzed similarly.

For defenses, some leagues reward for just sacks and turnovers, while others add in passes defended, and others account for points allowed, while yet one other accounts for yardage allowed.

There are many great defenses that bend but don’t break, allowing teams plenty of space to work between the 30-yard lines, but then keeping them out of the end zone. And then there are also a lot defenses that are aggressive and score lots of Fantasy points because of their interceptions, sacks and forced fumbles, but they might also allow a lot of points.

Do the appropriate amount of research surrounding your league’s Fantasy scoring, in order to understand which defense/special teams are more valuable in your league, compared to others.

Does your league give a ton of points for defenses that don’t allow a lot of points scored each game, or yardage gained? If so, then last year’s Patriots defense was probably much more valuable to your league than in most other leagues. That defensive unit gave up the eighth-fewest total yards per game (326), and the fewest points (15.6), but they were just average in sacks (34) and forced turnovers (23), with no defensive touchdowns. One should target defenses with strong pass rushers and ball-hawking cornerbacks that turn soft passes into turnovers.

Fantasy Defenses are tough to prognosticate from year to year because they can disappear as quickly as they arrived. Here are some things to look for in your prospective Fantasy DST pick.

Defensive and special teams touchdown are incredibly arbitrary and hard to predict. Obviously, you can lean toward defenses that take bigger risks, with more interceptions and sacks, or a special teams with a fast return man, but touchdowns are tough to predict. The Ravens (two), Seahawks (one), Steelers (one). and Packers (zero) scored very few defensive/special teams TDs last season, which means they should regress upward in 2017. Those four defenses average four DST touchdowns in the two years before last season.

If they’re facing bad offenses more than other defenses are, then it makes sense that they’ll score more Fantasy points. For instance, the Chargers and Vikings had two of the best Fantasy Strength of Schedules last season, and they both came through with top-five Fantasy performances. The 49ers, Jaguars and Saints have the best Fantasy SOS for defenses in 2017.

Play Matchups and Plan Ahead

Some people only choose to look at the Fantasy Strength of Schedule for the first few weeks of the season, while planning on ditching them and streaming defenses in the middle and late parts of the season. This strategy allows you to draft a defense second-to-last, and fortify your backups elsewhere. The Cowboys have a top-five Fantasy SoS in the first five weeks of the season, but a bottom-five Fantasy SoS in Weeks 6-10, when you should be able to pick up the Jaguars defense (first from Weeks 6-10 and third-best from Weeks 11-15). 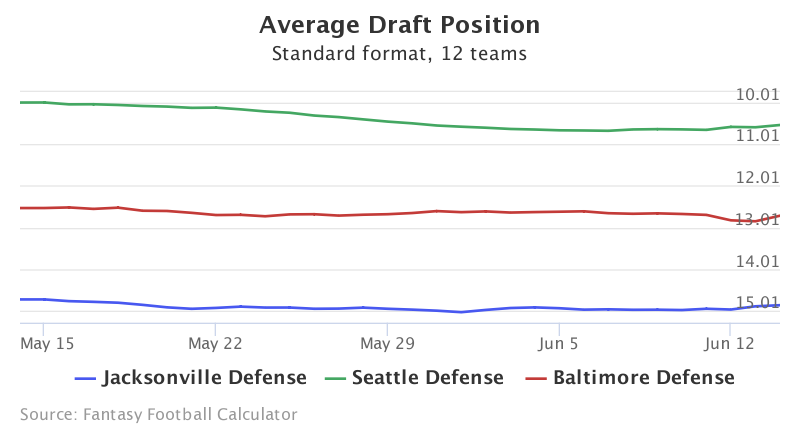 Fantasy defenses are volatile enough to make it smart for you to wait until later in the draft before grabbing one. While some decide to spend a ninth-round pick on one, grab a flier at running back or a wide receiver sleeper, and wait a few more rounds on your Fantasy defense.

Just know that you can still get a good Fantasy defense late in your draft, and even if they turn out to be a stinker, you can always pick up one of the surprise Fantasy DSTs that pop up on waivers.

Also, don’t underestimate how good a streaming defense strategy can work, meaning you can pick up defenses with good matchups each week, and plan on dropping them the week after. The problem with this method is you’ll have to battle other people on the waiver wire, and it’s a lot of weekly work and management.

These 2017 Fantasy Football Defense Rankings could give your team a nice boost in certain weeks, especially if they’re able to score the always exciting defense/special teams touchdowns.