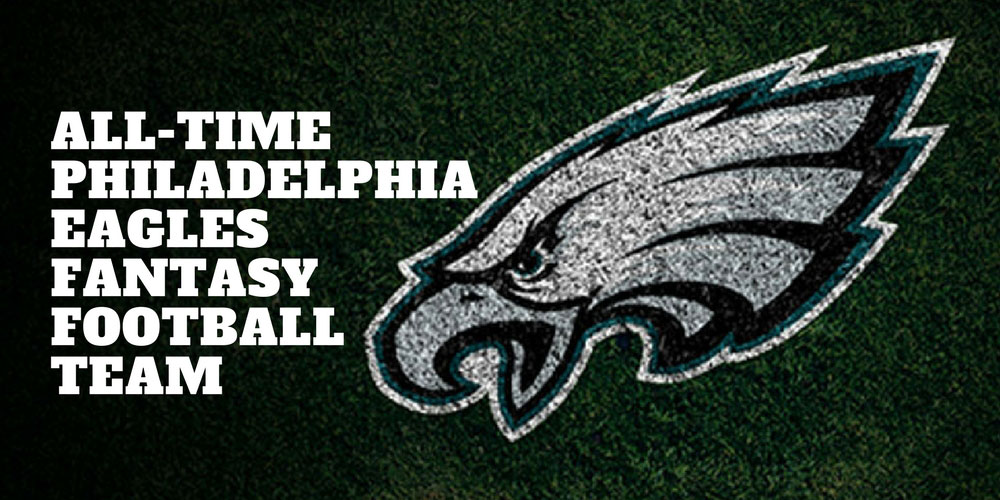 To help celebrate the Philadelphia Eagles participation in Super Bowl LII against the New England Patriots, I thought we’d look back at the all-time Eagles team for Fantasy Football players!

The Philadelphia Eagles have long been a great source for Fantasy Football players, and FanDuel players know their values more than anyone. While Eagles head coach Chip Kelly continues to produce excellent Fantasy players in his high-octane offense, Andy Reid’s offense was a pretty good Fantasy factory, as well.

This list of all-time Eagles Fantasy greats is a combination of consistency and game-to-game domination, as well as single-game heroics.

Long before Cam Newton exploded for one of the greatest Fantasy seasons of a running quarterback ever a couple seasons ago, Cunningham was dominating the Fantasy scene through the air and on the ground. Heck, Cunningham led the Eagles in rushing for four consecutive seasons!

In 1990, he threw for 3,466 yards and 30 touchdowns, to go with 942 rushing yards and five rushing touchdowns. Those totals fall just below Newton’s rookie season, but Cunningham put together a humdinger (yeah, that’s right!) against the Patriots in Week 8 in 1990. He threw for 240 yards, four touchdowns and no interceptions, while also rushing for 124 yards, which included a 52-yard scamper for a touchdown.

Nobody makes quicker cuts than McCoy, and both Andy Reid and Chip Kelly were able to take advantage of that quickness in turning the Pitt tailback into a FanDuel star. Not only has he been a first-overall pick candidate in yearly leagues, McCoy has been a FanDuel favorite because of his ability to rush and catch passes out of the backfield (half-point per reception!). He led the NFL with 17 rushing touchdowns in 2011 with Reid, then two years later, he led the NFL with 1,607 rushing yards in his first year in Kelly’s offense.

In 2013, McCoy led the Eagles in what became known as the Snow Bowl at home against the Lions in the middle of a blinding snowstorm. He posted a franchise single-game rushing record of 217 yards, with two touchdowns, with one catch for four yards. Those that loaded McCoy up in their lineups that week likely finished the day on the winning side of the FanDuel ledger.

Before McCoy took over in the Eagles backfield, Philadelphia hitched their wagon to another scatback out of nearby Villanova. At just 5-foot-8, Westbrook led the NFL in yards from scrimmage in 2007, earning early round draft pick status. He caught four or more touchdown passes in six consecutive seasons.

In Week 3 of that amazing 2007 season, Westbrook rushed for 110 yards and two touchdowns, while also catching five passes for 111 yards and one more touchdown. This game was against the Lions, too!

This might not be a name most current FanDuel players are familiar with, as Quick did most of his damage during the ‘80s, serving as Ron Jaworski and Randall Cunninham’s main target. In his second season in the NFL (1983), Quick led the NFL with 1,409 receiving yards (on 69 catches), becoming an early exception to the “Third-Year WR Breakout” theory. His 20.4 yards per catch that year was exceptional. Consider that the best yards-per-catch mark for any wideout with at least 60 catches last season was T.Y. Hilton’s 16.4 YPC.

Quick’s best game was in Week 13 against the Raiders in 1986, when he caught eight passes for 145 yards and three touchdowns.

By the time Fanduel showed up in 2009, T.O.’s best Fantasy years were behind him, and he was playing his next-to-last season of his career in Buffalo. Remember that? But before that, he had huge stints with the 49ers, Eagles and Cowboys. While he posted two better seasons with other teams (2001 in San Francisco and 2007 in Dallas), he did have one great year (and one bad year) in Philly. Before Owens and McNabb came apart at the seams in 2005, Owens posted 77 catches for 1,200 yards and 14 touchdowns in his first year in Philadelphia in 2004. Owens ranked seventh among NFL.com’s Michael Fabiano’s top 25 Fantasy players of the past 20 years.

Owens’ best effort in an Eagles uniform came in 2004, when he caught six passes for 134 yards and three touchdowns against the Cowboys in Week 9.

One player we’re all familiar with these days, D-Jax was another one of Reid’s fleet-footed playmakers that Kelly decided he had to ship out of town. But before playing with the division-rival Redskins, Jackson was the Eagles’ leading receiver for five of six seasons between 2008 and 2013. Interestingly, Jackson’s best season in the NFL came in his only year in Kelly’s offense, when he caught 82 passes for 1,332 yards and nine touchdowns.

In the early days of traditional Fantasy Football, very few tight ends were as good as Jackson. While this was long before the days of Rob Gronkowski and Jimmy Graham — or even Ben Coates and Shannon Sharpe – Jackson was rumblin’, bumblin’, stumblin’ for big games with Randall Cunningham at quarterback in the late ‘80s and early ‘90s.

In Jackson’s 1988 rookie season, he led the Eagles in receiving with 81 catches for 869 yards and six touchdowns (Quick broke his leg in Week 8). But it was the second game in his second season that was the high point in his career, when he caught 12 passes for 126 yards and three touchdowns. That effort was also better than any one-game effort from any of the Eagles wide receivers in team history!

Talking about Fantasy kickers is fun! In 2008, Akers set the Eagles’ franchise scoring record, making a franchise-record 33 field goals and 45 extra points, totaling 144 points. But back in 2004, he kicked five extra points in the first half of a Week 12 game against the Packers, then he kicked four field goals in the second half of a 47-17 blowout.

This “Gang Green” Eagles defensive unit is considered one of the greatest defenses of all-time, and if not for interesting circumstances, they could have been great for much longer. On offense, QB Randall Cunningham injured his knee at the start of the season and the team went through six replacements. But defensively, this crew led by Reggie White, Jerome Brown, Clyde Simmons, Seth Joyner and CB Eric Allen, ranked first in fewest passing yards, rushing yards and total yards allowed. It was Brown’s last year, as he died in a tragic car accident in 1992 and White was one of the very first NFL free agents after the 1992 season.

In Week 3, in Dallas, the Eagles defense shut the Cowboys offense out, allowing just 157 total yards. While their four forced turnovers were good, it was their 11 sacks that really made this their best defensive effort overall. Remember that this is a Cowboys team that had Troy Aikman, Emmitt Smith and Michael Irvin in their prime, with Jimmy Johnson as head coach.

From Buddy Ryan to Andy Reid to Chip Kelly, there’s no doubt that Philadelphia has provided a ton of Phantasy talent over the past few decades. And it’s very likely that if you had any of the players from our all-time Eagles team, you would have won that week!