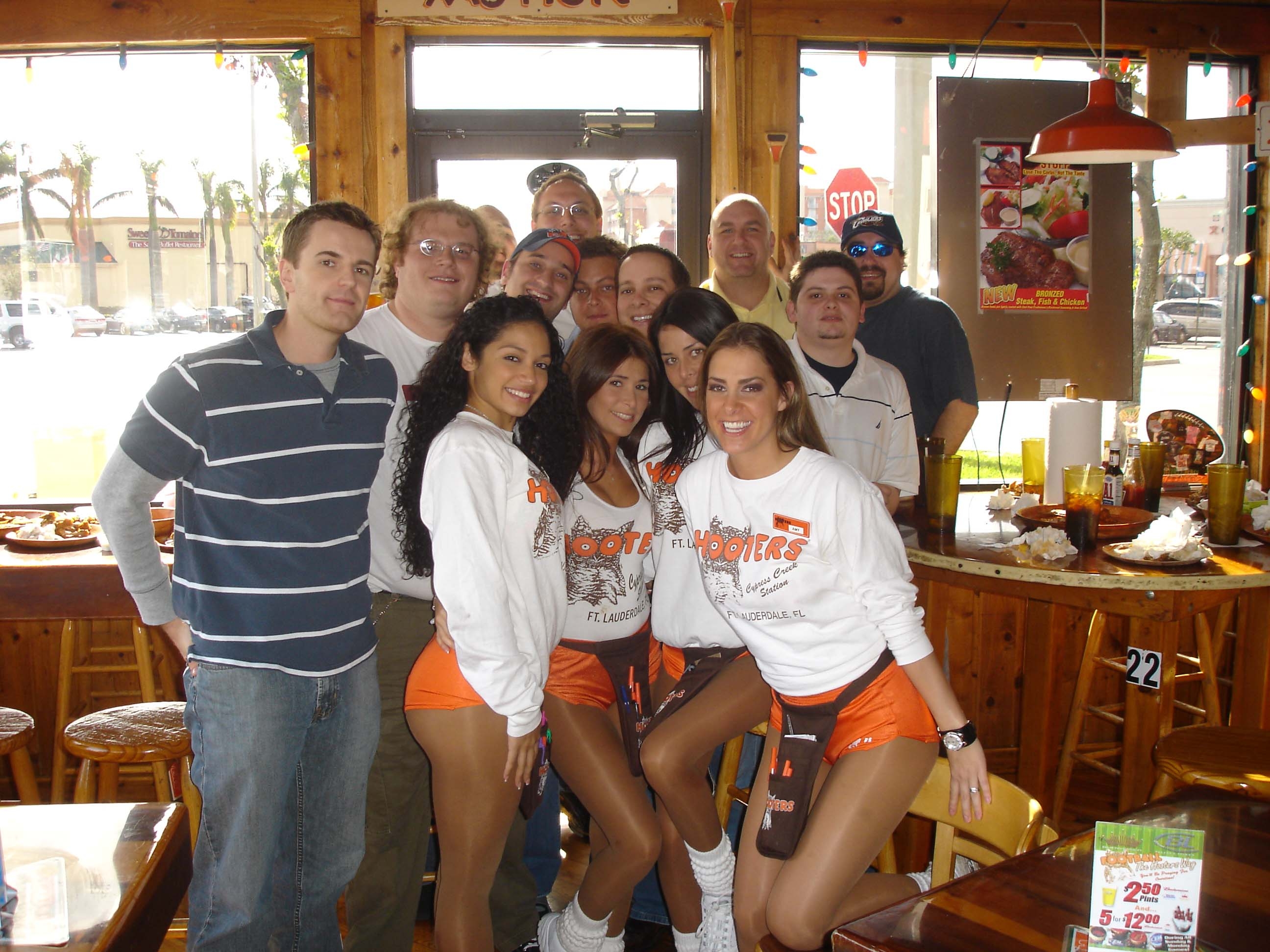 If there ever was a lunch that begged for a blog, today’s was it. Over the past few months, it seems the blog lunch has certainly outgrown itself, with people always requesting reports on them weekly.

Let me set this one up first with some background info. Dave Richard made a connection with one of our users (at CBSSports.com), Jay, who happened to be one of the regional managers for Hooters. After some personalized Fantasy Football advice, the wonderful gentleman offered to throw us a free Hooters wings party at our local store.

You have to understand that for this group of guys, that was like the greatest gift of all. You know how they say, “Diamonds are a girl’s best friend”? Well, it’s not a great stretch to say that, “Hooters is a guy’s best friend.” Hooters is to Fantasy guys, what Dobish is to gay, pirate-themed karaoke bars. (When picturing Dobish, imagine Gallagher — but not so normal looking. He’s got a Category-5 hurricane going for a bald spot, so he’s rarely seen without a hat.

Back to Hooters: When I was about 15 years old, my father took me to Lakeland, Fla.,  on a business trip and he was going on and on about the wings at this new place called Hooters. Central Florida is the birthplace of this fine establishment. The original was actually in Brandon (near Tampa), and rarely has a month gone by in my life that I haven’t frequented this place. Needless to say, I’m old school Hooters. Even my wife loves Hooters! (I proposed to her minutes after the first time she said to me, “Hey, let’s go to Hooters!”)

Hooters wings get a bad rap. You often hear people complain about them and say, “Awww man, those wings aren’t buffalo wings!” And they’re right. They’re Hooters wings. They are absolutely awesome and they have a category all their own. It’s like saying the Final Four isn’t basketball because it’s not the NBA. Dave Richard invited all the Fantasy writers, as well as a number of co-workers that have helped the content group throughout the football season. Unfortunately, and understandably, he was only allowed to take a few guys, so there’s a small group of people that did not go that certainly deserved an invitation. I did everything I could to force Brian Flood to give up his seat, but he came anyway. To those that were overlooked, I sincerely apologize and suggest that you fart in Dave Richard’s cube in protest. Honestly though, he was in a tough spot. It’s like the fat guy’s version of Sophie’s Choice.

Once we all arrived and got out of our cars, it looked like a cloud of Fantasy nerds were descending upon the joint. Brett Tresky, Eric Mack, Jake Payton, Michael Fabiano, Richard, Sergio Gonzalez, Flood, Daniel Dobish, Jeff Bisbee, Dwyne Philippin, myself and Dave the new guy (we had to fill our three-Dave quota) were ready to eat. Dobish purposely gave me the fist-pound greeting that I despise and then he gave me a great line. He said that when someone holds out the fist and you end up shaking it, it’s like rock, paper, scissors. Paper covers rock, I win. It was funny then, at least.

After some initial drama when the general manager said he knew nothing about this party, he eventually said it was cool and that we had 200 free wings coming for the group. We felt like a football team walking into that place, taking over two big tables in the back — a very white, non-athletic, pasty football team.

In some strange coincidence, most of the fat guys and heavy eaters ended up at my table. We were like the last six Cheerios in a bowl of milk, the way we clung together. I ended up between Tresky, who has been sick all week, and Dobish, who is sick in the head. For whatever reason, Dobish decided to save most of his talking for when his mouth was full. So I had to hold my hand over my drink for most of the meal (he even caught me doing it). I don’t need any Hooters wings shrapnel flying into my coke because Dan insists on playing chicken-wing wood-chipper.

Flood came a little late and almost had to sit at a short stool. Today was his day off, so he went straight from Hooters to go get a massage. Who does that? What a treat for that masseuse. “What’s going on? Don’t mind that smell surrounding me and try not to massage my midsection too much or we’ll both get more than we bargained for.”

The curly fries came first and Dobish and I schemed to eat from the bowl farthest from us, so that side of guys would run out of fries quicker. Fat guys aren’t stupid. Although, it was a fight to get all of the big Porky Pig curly-cue fries. Usually you’re just stuck with the open parentheses fries.

Best quote of the day goes to Flood after noting that the over/under on the number of wings I would eat was 15 1/2, “I’m going to parlay the over on Gonos with the under on Fabiano.” Dwyne looked "surprised" for a couple weeks -- mostly because he accidentally shaved off half of his eyebrow. (Chainsaw accident.)

Halfway through the meal, Dobish had his patented orange wing goatee with several chicken parts imbedded in his beard. Out of the blue, he asked Dwyne, “What happened to your eyebrow?” And Dwyne’s big head turned the brightest shade of red I’ve ever seen. He looked like an embarrassed Otto the Orange, Syracuse’s mascot. Apparently, when trimming his eyebrows, he got a little too close with the clippers and now he looks like he’s eternally surprised. I figured he shaved one eyebrow off in tribute to his Super Bowl-bound Steelers and their helmets with a logo on just one side. For the rest of lunch, it was tough to talk to him without making fun — almost like any other lunch with him.

Tresky had to get back for a meeting, so he shoved his wings down like he was going to the electric chair. We have a rule about wings too – “You touch it, you eat it.” So there’s no fishing through the pile for the best. Strangely, every time Tresky pulled out a wing, it just happened to be the smallest ones of the bunch. They looked like squirrel drummettes or pigeon wings.

Bisbee and Jake, obviously Hooters minor leaguers, lamented that they ended up sitting facing the window with their backs to the waitresses.

Carey Dunn was NOT at this lunch. (He wondered why he never makes the blog.)

“Dave the new guy” was wearing an ’80s Michael Jackson, studded belt. We’re still trying to figure that out. Emack said it was interesting to watch Dave’s face as he listened to Flood’s voice and comments. We’ve noticed that when you first talk to Flood, his strange voice makes you cock your head to one side like a dog hearing a whistle. Then you wonder, “Is this guy for real? Does he really talk like that and is what he saying as ridiculous as I think it is?”

Once we got back, everyone loaded into the elevator (for those keeping score, that’s 10 guys and 19 eyebrows). Alarms and sirens went off once we were all packed in and Emack thought we won something because we were the elevator’s millionth customer.

It was a fantastic lunch, so big thanks to Jay, Hooters and to Dave Richard (who obviously gave the guy good enough Fantasy advice that he wanted to feed us for free!)