There are certain moments that seem to define your life. My trip to the bathroom at Disney about 10 years ago was one of those moments. This story is long, but the payoff is worth it. Don’t be discouraged just because it’s called a “poop story.”

It was a hot and humid day at the Magic Kingdom. I had just polished off a bread bowl full of clam chowder and the family decided to hit Splash Mountain.

Lines at Disney are a little like foreplay — you have to sit through a whole lot of crap before you get to the good stuff. The Splash Mountain line was standing at about a 75-minute wait at the back end. My stomach gurgled its disapproval, but I calmed it down with a Mousketeer bar.

About an hour into waiting, after winding through miles of walkway (I swear it was in a circle!), my stomach could not hold off any longer, and any sudden drops down a flume ride would probably give the cleanup crew much more than they bargained for.

Let me give you a little explanation about myself. I must have inherited the shortest intestines in the world from my father. After a big meal (which is every meal), I get what my father called, “a two-minute warning.” If I don’t make it to a toilet within that two-minute period, there’s a great chance I’ll be going home in a different pair of pants than the ones I left with.

So, within 15 minutes or so from the front of the line, I decide to bail. By now, I’ve broken into a cold sweat and I can barely speak.

I ask the ride attendant where the closest restroom is and he points it out to me. I can actually see the “Men” sign from where I’m standing and I smile. On the way there, I begin regretting not having anything to read, but then again, beggars can’t be choosers.

I’m sure you are familiar with Pavlov’s dog — bell rings, dog begins to salivate. There’s something similar related to men and restrooms — as we get closer, our bowels begin to loosen up. As I approach the restroom, I realize there is a “Sorry for the Inconvenience” sign up in the front and a team of female custodians are putting a shine on the lieu. I had to immediately throw my gears into backup mode and my belly was not happy. I asked one of the custodians where the nearest “available” men’s room was, and she pointed over a hill and a bridge. It might as well have been Morocco that she was pointing at because at that time, both seemed equally far away. I now had to trek my way out of the Splash Mountain line, through Frontierland to the other side, over a bridge, to a restaurant called, “Pecos Bill’s.”

I’m doomed — as are the eight or nine people within a six-foot radius of me.

The ridiculously uncomfortable saunter through the crowd was troublesome, as I got behind every slow person, every wheelchair, every two-year-old child whose parents are walking rather than carrying, every tourist pointing skyward and every group of singing Brazilian tourists that travel in packs. It was as if God himself decided this was my test. They should make a video game out of this journey.

From Splash Mountain to Pecos Bill’s

I finally see the restaurant (about 100 yards from Splash Mountain) and the restroom. The place is absolutely packed and as I approach it with a knees-together kind of run, I realize that there is a very real chance that the stalls will all be full. My mind quit at that point. I said to myself, “Self, if there’s not an open stall, you are going to give these fine people around you a great/horrible story to tell for years.” I can hear it now, “Daddy, tell the story about when that great big bear wearing a Mickey hat came into the men’s room and exploded all over everyone!”

I scooched into the men’s room and, lo and behold, there was a stall door swung open. As I tiptoed to the available stall, I’m noticing that the restroom is quite crowded and it even seems like some guys are waiting for an open stall. I didn’t do the math in my head, but my spidey-sense was tingling. Something was amiss. Why were they waiting for an open stall with one soooooo obviously open right here!?! I was incredibly unprepared for what awaited me.

This is where the poop story gets interesting.

I opened the stall door completely to reveal a pair of completely abused men’s underwear sitting directly in front of a perfectly clean toilet.

Have you ever had a moment in your life where you felt like there should be a movie soundtrack playing in the background? Well, this was one of those times. The eerie, haunting choral music from “The Omen” would have been my choice once that door swung open. (That’s the musical score of any great poop story.) Obviously, whoever did this did not follow the 15 Men’s Restroom Rules.

When a Poop Story Goes Bad …

The guy that had previously worn that pair of crap-filled underwear, I quickly surmised, had eaten a combination of: Split-pea soup, macaroni and cheese, peanuts (shells on), caramel, a dead seagull, nine Skittles and a souvenir coin from the Hoover Dam.

Decision time. But when you think about it, there really wasn’t that much of a decision at all. After all, when I left this room, there would either be one pair of ruined underwear or two. 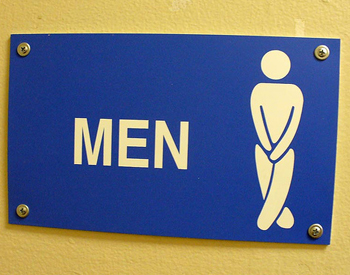 I stepped in, closed the door and chose to straddle the defiled civvies as I sat. You have to understand how difficult this was. I have the world’s weakest gag reflex. I gag at coagulated gravy. I gag when I see someone else’s chicken wing bones. I gag at an ugly baby, much less anything else that comes out of said baby.

But I stood strong, concentrated on the task ahead of me and I took care of it like a man — like a weak, sweaty, disgusted man.

After about five minutes, the people in the men’s room began to cycle in and out — new patrons replacing the old. So a group of rowdies come in, sounds like about three or four 20-somethings. As they are all talking to each other, I hear one of them step into the stall next to me, continuing his conversation with the two guys at the urinal. They’re yucking it up while I’m trying to think of a happy place.

So as the conversation continues, the gentlemen at the urinal move to the sinks to wash their hands, continuing to talk to the man in the stall next to me.

Finally, one of the guys at the sink starts laughing and he says, “Hey Mike, say CHEESE!” And he proceeds to hold a camera up over my bathroom stall — not Mike’s, MINE! — and he takes a picture. I tilt my head sideways in a “Are you kidding me?” kind of expression.

Then I say out loud, “Wrong stall!”

The shutterbugs shriek and leave the scene immediately in laughter and Mike, the original target, says, “What’s going on?”

I tell him what their buddies did; he laughs, flushes and escapes as quickly as possible. Pretty sure he didn’t wash his hands, either — so don’t shake hands with anyone named Mike.

So somewhere out there, there’s a picture of me, head tilted sideways, sitting on a public toilet, with the most abused, disgusting pair of mud-filled underwear you could possibly imagine, between my legs.

I’m fully expecting to come across it someday on the Internet. I SWEAR — THAT’S NOT MY UNDERWEAR!