The basis of this site is that it seems like everything in my life revolves around Fantasy Sports. I imagine it’s the same with many of you, which really isn’t healthy, but what are you gonna do?

I post often at DavidGonos.com about Fantasy Sports and everything else in my life that has been affected by Fantasy Sports. (Except for poop. Sometimes I write about poop.) 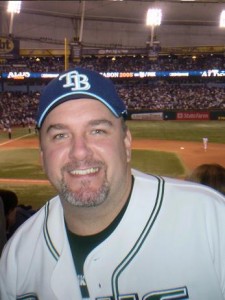 I’ve written for several sites, starting with FFInformer.com in 2000, then FantasyRef.com in 2001-03, which is a site I built on my own. I sold that site when I signed on with CBSSportsLine.com, where I ended up writing in all five Fantasy sports for well over five years.

I moved on from CBS in 2008 to join a start-up called OPENSports.com, where I eventually got to meet and work with several athletes, including O.J. McDuffie, Jason Sehorn, Dennis Rodman and Sean Salisbury. That’s an eclectic group!

We also used to get blogs and football picks from several other athletes/celebrities, including Adam Sandler, whose picks were really sent in by Jack Giarraputo. Yeah, that’s right. David Gonos has Jack Giarraputo’s email address. The producer of “Bucky Larson: Born to Be a Star” — is one of my contacts. I’m practically a Hollywood (Fla.) mogul.

After OPEN Sports folded in late 2010, I started writing for RotoExperts, where I posted “So-Called Fantasy Expert” articles alongside former co-workers, Engel, Dobish and Ian Riley, who followed me over from OPEN Sports.

The current site you are looking at was created in the spring of 2012, when I also began to post columns for SportsIllustrated.com, alongside another former co-worker in Emack. I refer to him a lot in many of these blogs because we were Senior Fantasy Writers together at CBS where we led the Fantasy Baseball content. We’ve since become friends and we were a deadly defensive duo on our Maguire’s softball team, along with Dobish and Eisenberg. Playing softball was the task we had to accomplish before beer and wings.

In 2015, FanDuel.com expanded their content team, and I wrote for them for a year, before they un-expanded it again after the “Great DFS Legal Disaster of 2015,” as it’s known in the industry.

In 2018, I became one of the Fantasy columnists over at TheAthletic.com, in spite of my 19-year streak of no longer being athletic.

Some Things David Gonos is Proud Of

Some Things David Gonos is NOT Proud Of Despite these things, this Fantasy life has been very good to me!