Athletes always talk about the “pop” they hear when they tear an ACL. I’d imagine it’s like hearing, “You’re fired!” from Donald Trump on The Apprentice, or “Honey, we need to talk,” from your significant other. You get that feeling in your stomach when, just for a split second, you sincerely believe your life is coming to an end. Jamaal Charles must have had that feeling last year. And so did his Fantasy owners. After just 12 carries, the no doubt first-round Fantasy selection was finished. His 2011 campaign was done.

The majority of Charles’ owners probably didn’t win their league championship last year, and will more than likely never draft the Chiefs’ running back again. That’s what happens. When you draft a guy so high and he disappoints; you’re definitely not going to touch him again. (Gonos has him ranked 18th among running backs.)

But for the rest of us, 2012 marks a new season for the speedy back. And to me, Charles’ has some value in leagues where he’s being drafted in the late third or early fourth round. Here are four reasons why:

1. He tore his ACL at the beginning of last season

NFL.com’s Michael Fabiano does all the work for me here with his article published in the early off-season on running back production post-ACL tears. In this piece, he makes it clear that there are two factors that determine the success of a running back the season after an ACL tear:

It’s why Jamaal Charles is in the best position of all “ACL tearers” entering 2012. He’s 25 years old, and the injury happened during Week 2 of last season. He’s going to participate in all preseason activities, allowing him to be completely ready for Week 1 of the regular season.

Two years ago, Brian Daboll was the offensive coordinator in Cleveland. That season, Peyton Hillis was the second-best Fantasy running back. Last year, he had the same position in Miami. Reggie Bush had the best rushing season of his career, and finished, in bigger leagues, as an RB1. I get that Hillis is in Kansas City now, but I’ll get to that with my third point. The key takeaway here is that Daboll not only makes his top running back a Fantasy success, but he likes to run the ball with a balanced offense. He wants to attack opposing defenses with different personnel movements. He likes, as he has put it, an “up-tempo” offense .

Can you think of a better running back than Jamaal Charles to confuse defenses with versatility?

3. Peyton Hillis isn’t as big of a threat as people make him out to be

If the Chiefs were going to run the ball 300 times this season, then yes, I wouldn’t be as high on Charles. But they’ve already said that they’re aiming for over 500 carries. To say that Charles won’t get at least220 or 230 of those – barring injury – would be unfair. He’s going to get touches, even if Hillis is in the mix.

And why are people so quick to ignore Hillis’ 2011 season? After bursting onto the scene in 2010, Hillis dropped tremendously last season. His yards per carry dipped by nearly a yard, and he only scored three touchdowns. Mind you, he didn’t play a full season due to injury, but should we be so fast to disregard how dreadful his 2011 season was?

I expect Hillis to be better than he was last year, but by no means as good as he was in 2010. We’ve seen way too many one-year running back wonders to simply give Hillis a pass. 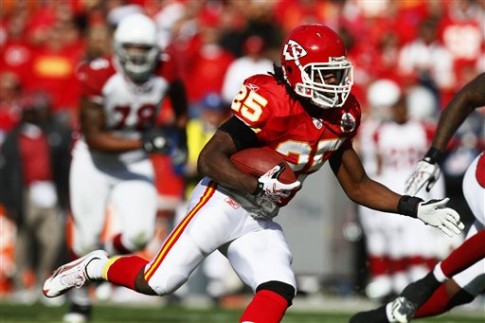 Jamaal Charles’ best season was in 2010, when he had 1,935 total yards from scrimmage and eight touchdowns. Photo Credit: 4screens

4. Just look at the stats

We all know Charles can rake in the yards — that’s never the dispute against him. What people knock Charles for is his lack of scoring.

But do you realize that he has scored just eight touchdowns in each of the last two seasons played?

If we look at last year’s standard scoring Fantasy numbers, Ryan Mathews, Michael Bush and Steven Jackson all finished as top-10 running backs with eight or fewer touchdowns. Each of those backs hovered around 1,400-1,500 all-purpose yards. In 2009, Charles’ all-purpose yardage total was 1,417. And In 2010, he had 1,935 yards from scrimmage.

You’re not asking for a lot of touchdowns when you draft Charles. Heck, if he gets in the end zone just five times this season, he will still have value. I mean, think about it. He’s going to get well over 200 carries, and even if his yards per carry decreases by over a yard, he’ll end up with more than 1,000 rushing yards. Add in the five touchdowns, some more receiving yards, and he’s the equivalent to a 2011 Reggie Bush — a player that was a low-end RB1 last year in deeper leagues.

Take a shot, will ya?

According to MyFantasyLeague.com’s ADP rankings, Jamaal Charles has been the 12th running back off the draft board. As I showed above, I truly think this could be his floor. He’s got an unbelievable yards-per-carry average, less competition than people recognize and is on a team that is certainly going to run the ball a heck of a lot.

I’m typically not the kind of Fantasy player to take early round gambles. I leave that for the later parts of a draft. But I still like Charles because his talents — and reward — far outweigh his potential risks.