What is the shelf life of Fantasy Football first overall picks? How long can a stud remain the No. 1 pick?

I went back to 1971 and examined the first picks in Fantasy Football in every season up through last year. I only broke down the running back position, assuming they would be the top pick in any Fantasy draft – even in the drug-induced ‘70s. Players get one point for every rushing and receiving yard and six points for every rushing and receiving touchdown. I don’t give any points for receptions, since four out of every five leagues don’t use that stat. My initial Fantasy Football league dates back to 1989, so I used the first overall picks from there on. But understand that in many cases before 1989, I had to assume who would have been the No. 1 draft pick, based on the stats from not just the previous year, and other years leading up to that point, as well as injury news. For instance, LaDainian Tomlinson wasn’t the top Fantasy scorer in ’04 or ’05 (Shaun Alexander), but he was still projected to do better than everyone else entering each season.

In the 41 Fantasy drafts (including this upcoming draft season) since 1971, there have been 17 different Kings of the Hill (first overall picks). Interestingly, 11 of those players were No. 1 picks for more than one season. Marcus Allen, Earl Campbell, Chris Johnson, Ron Johnson, Billy Sims and Thurman Thomas were all Fantasy aces for just one year, along with Foster, who is the top dog for the first time. (Adrian Peterson was drafted a little higher on average than Foster in 2011.) Peterson is also the only player to have split years as the first pick (2009, 2011).

The first King of the Hill got knocked off pretty quick. Giants RB Ron Johnson came to the Big Apple after a rookie season in Cleveland. He was the top Fantasy player entering 1971, but missed most of 1972 with a knee injury. He’s our first “King of the Hill” as the likely No. 1 draft pick of 1971. Johnson rebounded in ’72, scoring the most Fantasy points again. But Floyd Little was a steady Fantasy presence in Denver, so I’m guessing Fantasy Football owners went after him (and his healthy knees) over Johnson in ’73.

Little gave way to Buffalo’s O.J. Simpson, who needed a couple seasons in the league before becoming an elite Fantasy player. But once he did climb to the top (leading the league in rushing for four of five seasons between 1972 and 1976), he stuck around for a while. Only one other player stayed at the top longer than the Juice’s four years. Walter Payton took the baton from O.J. in the late ‘70s, and his reign was for three years (up to 1980) until Campbell, Sims and Allen followed through 1982. Allen’s 193 points were in the strike-shortened ’82 season, when he averaged 21.44 Fantasy ppg in nine games. Back to Payton though, he scored more than 200 Fantasy points in 10 different seasons, which is still the high mark today, with Barry Sanders behind him at nine. For perspective, Tomlinson had only seven seasons with 200-plus points.

After the one-and-dones were over (Campbell, Sims and Allen), Dickerson grabbed the top spot for six consecutive seasons – the longest hold on No. 1 in the past 41 years. He won the Fantasy scoring title four different times in that span. 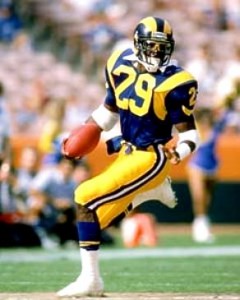 Dickerson was also the only Fantasy King of the Hill to be with two different teams. His midseason traded to Indianapolis in the strike-shortened ‘87 season allowed Fantasy owners to see he could still dominate on this new team. Had the trade happened during the offseason, it would have been interesting to see what Fantasy owners would have done. He rushed for 1,011 yards and five TDs – in just nine games with the Colts.

If Bo Jackson played a full season or two with the Raiders during his prime, and the Raiders traded Allen, Bo would have had a shot at the No. 1 overall pick. Just another of the many alternate realities if Bo Jackson made different decisions. But in 1989, Dickerson scored only eight total touchdowns, and Buffalo’s offense began to pick up speed, with QB Jim Kelly, WR Andre Reed and a great pass-catching running back called Thurman Thomas. So in 1990, for the first time in seven seasons, the first name mentioned on Fantasy Draft Day was someone other than Dickerson. The expectations surrounding the Bills’ passing game were enough to give Thomas the nod, but strangely, he never led the league in Fantasy points. Sanders, on the other hand, led the league in Fantasy points three times, and he was the Fantasy ace in ‘90 and ’91. Unfortunately for him and his Fantasy owners, the Lions used him in the non-traditional Run-n-Shoot offense in the early ‘90s, and that limited him to just 21 total touchdowns from 1992-94. Smith followed Sanders (although, along with Thomas, the three of them were argued in bars across the land as the best RB). Smith would match Dickerson for winning the Fantasy scoring title in four different seasons, still something no one else has done. Emmitt also matched Payton being a top-five Fantasy running back at the end of nine different seasons. Davis was a sixth-round pick out of Georgia in 1995, but he emerged into one of the greatest all-time darkhorses in Fantasy history. In his first four years in the NFL, he scored 56 rushing touchdowns – more than any other Hall-of-Fame RB did in their first four years. A knee injury also ended T.D.’s career early, allowing Faulk to take the top spot for the next three years. Faulk’s tenure with St. Louis, with OC Mike Martz’s Greatest Show on Turf, was Fantasy gold from 1999-2002. Davis or Faulk was likely the No. 1 pick when you first started playing Fantasy Football. He’s one of only three NFL players to notch 10,000 rushing yards and 5,000 receiving yards (along with Allen and Tiki Barber). The Colts traded Faulk in 1998 for a couple draft picks, and grabbed Edgerrin James in that draft. James went on to outscore Faulk in Fantasy play by just one point in 1999, leading the NFL. Holmes scored 745 Fantasy points between 2002 and 2003, which is more than any other running back in NFL history in two combined seasons, making him the top pick in ’03 and ‘04. In’ 03, he broke Faulk’s NFL record for total touchdowns in a season with 27. Holmes was also just the fourth player to be the top Fantasy pick with one team, despite being drafted in the NFL by another team (Baltimore). 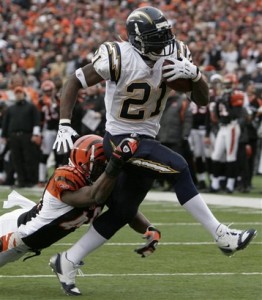 LT2 was the only real candidate to take Holmes’ top spot after an ’04 injury cut the Chiefs RB’s season short. In each season of 2002-2004, Tomlinson ranked third in Fantasy points.

While he was “the man” for the next four seasons, Alexander and Larry Johnson both made their presences known in the ’05 season. L.T. scored over 300 points in five different seasons, which is unmatched in NFL history. As a matter of fact, no one else has even done it four times. The 418 points he notched in ’05 is also an NFL high mark. Only Dickerson was a No. 1 pick for more than L.T.’s four seasons. “All-Day” Adrian was the top pick in 2009, despite Michael Turner outscoring him in Fantasy points by more than 10 percent in ’08. Since being drafted in 2007, he has been a top-five Fantasy Football scorer in every season – until 2011, when he tore his ACL and MCL in his left knee. Peterson has averaged 241 over the past five seasons – more than any other running back. If Foster falters, and Peterson finishes 2012 strong, he could be the top pick in 2013 too! After sharing the backfield with LenDale White in Johnson’s rookie season, the Titans wised up and gave him most of the load in 2009. That’s when he rushed for 14 TDs and 2,006 yards, earning the nickname, CJ2K. He rushed for more than 800 yards in the month of November alone, that season. Johnson was out of shape last season, which kept him from rushing for more than 100 yards more than four times all year.

It takes a special player to end up as one of the very few Fantasy Football first overall picks. We’ll see how that works out in future years, especially now, as quarterbacks continue to post up incredible numbers.