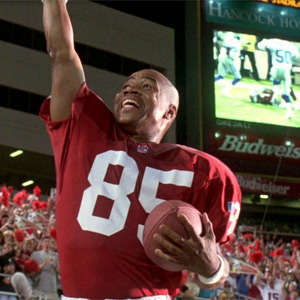 Each week, around Tuesday, sometimes Thursday, I go on The Fantasy Funhouse radio show on the SiriusXM Fantasy Sports channel with Nando Di Fino. We talk about TV shows, movies, the ‘80s – and we talk about Fantasy Football. We also take some calls from listeners asking questions about their lineups each week, and the Week 8 WR Rankings came in handy today.

A fella named Brian called in asking whether they should start Julian Edelman or Mike Wallace as their third receiver. First off, that’s an embarrassment of riches at the wide receiver position, with Randall Cobb and Brandon Marshall starting ahead of both of them.

I like Edelman this season, as Tom Brady’s main man, pulling in over six catches per game, but he has just one receiving touchdown. He doesn’t offer the goal-line target work that Wes Welker once gave Brady.

Why We Should Love Wallace

Wallace, on the other hand, has been one of the quietest Fantasy studs of the season. He has one touchdown catch in every game but one, so far, and Ryan Tannehill’s development has been largely due to this receiver’s ability.

One of the rules I like to live by during Fantasy draft season is to never draft a wide receiver that wasn’t a No. 1 on his previous team (Wallace and Antonio Brown were co-No. 1s in Pittsburgh), but is expected to be a No. 1 on his new team. The Alvin Harper Rule. They almost always struggle in that first season.

However, picking up a No. 1 wide receiver in his second year on a new team usually ends up being a good idea.

Wallace has already tied his touchdown totals of each of the past two years (five), and he’s well on pace to break his career highs across the board. His best season ever was in 2010, his second year in the league, when he caught 60 balls for 1,257 yards and 10 touchdowns. He’s currently on pace for 80 receptions for 960 yards and 13 touchdown catches. He has emerged into a reliable every down receiver that’s not a one-trick deep threat anymore. While we don’t expect him to catch a touchdown in every game, we do think he’ll be a consistent, reliable Fantasy receiver going forward, that makes for one of the best WR2s you can own.

Also, let’s not forget that there’s a 9:30am ET game (Detroit vs. Atlanta) in England this week, so you’ll need to have your lineups set early. This is also serendipitous, as you’ll have a good idea of Calvin Johnson’s (ankle) health. If he’s inactive, you’ll have plenty of time to prepare and change your lineup for the 1pm ET games.

These Week 8 WR rankings are also helpful for SKYLLZONE’s Fan vs. Machine instant snake drafts on SKYLLZONE.com. Check out our articles over there at blog.SKYLLZONE.com, as we help you in this awesome Daily Fantasy Football game.

Are there some wide receivers in our Week 8 WR rankings that you think we have too high or low? We want to help our readers, so your comments on our rankings gives them one more perspective — and that’s a good thing!