While we have control over what kind of toppings we have on our pizza and what kind of beer we drink—hopefully you enjoy strong IPAs, otherwise I have very little respect for you—there are many, more important structures in our lives that we have no control over: the laws of the cities we live in, natural disasters, Raheem Moore blowing his coverage and allowing a 70-yard touchdown pass on a third-and-three with 44 seconds left in last year’s AFC playoffs; You get the point (and the clue that I am a Broncos fan).

If we focus on what receivers control themselves, we can adequately assess a receiver’s performance, and find a way to numerically judge their ability independent of their quarterback and offense.

When it comes to wide receivers, a lot needs to go right for their statistics to show production. So, what can Fantasy wide receivers control?

(For those sabermetricians out there, this buildup probably sounds very familiar to you, and you can skip ahead a few paragraphs to where I diagram the formula and show the results). Plain and simple, receivers can control how often they get open down field. That’s it. This picture is too amazing not to include in the article. Photo Credit: Player Perspective.

In an effort to develop a formula that divulges the true quality of performance for Fantasy wide receivers, I developed Receiving Independent Offense (RIO).

RIO puts a numerical value on a receiver’s ability to consistently get open down field. The sabermatricians that are still reading are either rolling their eyes or are very interested. I told you to skip ahead! You already know where this is headed!

RIO answers the question, “if every wide receiver had played on the same offense and had the same quarterback, who would be the best reciever?”

*League AVG and Standard Deviation indicates the average and standard deviation of a given population. For our purposes, the population calculated the RIO for the top 69 Fantasy wide receivers from 2012 (I swear it is a coincidence that it turned out to be 69 players).

What is interesting is that this list comprises the leagues top wide receivers and a lot of wide receivers who, I am sure most people would conclude are talented, but play on an offense whose quarterback or offensive line, or some combination of both, are less than average.

Now that we have seen the players that had the best RIO for 2012, let’s look at the players whose RIO score differs the most in a positive direction from their actually Fantasy rank.

For this list I subtracted a receiver’s 2012 Fantasy rank — I used FFtoday.com’s scoring system — from their 2012 RIO rank: 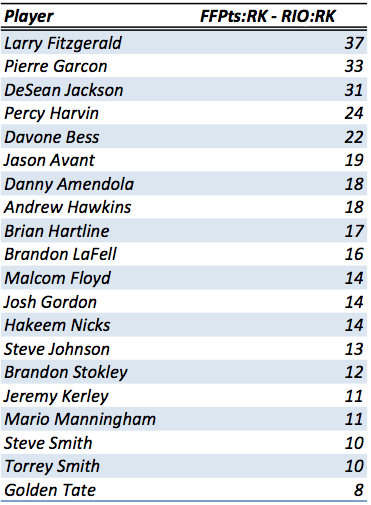 Well, that looks about right. It doesn’t take a football expert to know that Fitzgerald had a lousy quarterback last year, or that Pierre Garcon was a stud when he played. But, it is interesting to see how well they played in comparison to their final Fantasy totals.

*I would like to say that this article would not exist without Voros McCracken and his discovery and work on DIPS theory.