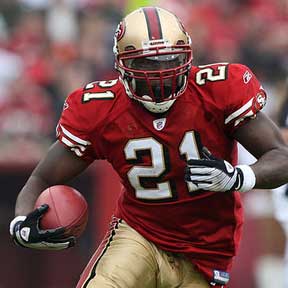 Granted, some aren’t around these days, like LeSean McCoy, but for the most part, you’d kill to have players like Arian Foster, Ray Rice, Marshawn Lynch and even Chris Johnson and Matt Forte. Sure, Darren McFadden and Ryan Mathews were swings/misses, but the odds are in your favor if you took an RB in the first round.

Next summer, try to remember this feeling — and draft “Beast Mode” and never look back.

I posted the first round of a 2013 Fantasy Football Mock Draft that you might find interesting! Niners RB Frank Gore has just three 100-yard rushing games, but he has seven touchdowns and he is on pace for his second-best season ever. Photo Credit: DavidLGonzalez

These rankings are for non-PPR leagues, with four points for passing touchdowns. The good guys over at Four-Downs.com supply our rankings tool, so we’re happy to use it each week and give them a shout-out!

Also, the rankings tool prevents me from adding Lions RB Mikel LeShoure, so understand that I have him 28th this week.