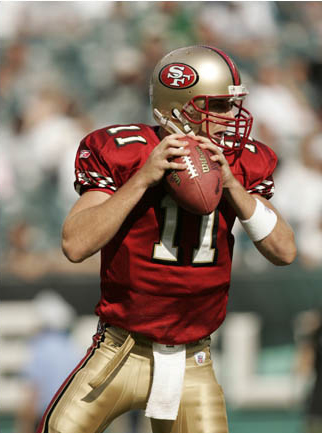 After this weekend’s 2012 NFL Draft, Fantasy Football players want to know not only which rookies will help their team, but which Fantasy veterans will climb or fall because of their new teammates? Here are the early looks at Fantasy Football Climbers and Fallers.

The top Fantasy Football rookies will be ranked in an upcoming blog. Blaine Gabbert, QB, Jacksonville: The worst passing offense in the league last year gets one of the biggest playmakers in the draft in WR Justin Blackmon. He should step in and start immediately for one of the worst receiving corps over the past few years.

Jake Locker, QB, Tennessee: Another sophomore QB that added a rookie WR to his targets. Baylor’s Kendall Wright should work the slot underneath, while Kenny Britt (knee) and Nate Washington stretch the field.

Alex Smith, QB, San Francisco: It’s tough to imagine Smith not having a huge season in 2012, as the team added Brandon Jacobs, Mario Manningham and Randy Moss in free agency. Then Niners management added rookie WR A.J. Jenkins. He has great measurables, but it will be interesting to see if he can improve his pass-catching ability. The team already had Frank Gore and Kendall Hunter from last season, along with Jacobs, and now speedy Oregon RB LaMichael James joins the group. Mr. Smith should be quite happy!

Pierre Garcon, WR, Washington: After last year’s craziness in Indianapolis, Garcon joins a Redskins team that will tout No. 2 pick Robert Griffin III at QB. There are plenty of receiving options in Washington, but Garcon, Santana Moss and Fred Davis should receive most of RG3’s attention.

Larry Fitzgerald, WR, Arizona: Notre Dame WR Michael Floyd doesn’t play QB, but his addition should eventually take some heat off of No. 11. The veteran hopes for some of the help he received from former teammate Anquan Boldin. Colt McCoy, QB, Cleveland: His Fantasy value was pretty low to begin with, but the selection of 28-year-old QB Brandon Weeden drops his value even lower. McCoy will have to play really well to keep the old-timer rookie on the bench all season.

Rex Grossman, QB, Washington: Did we really think he’d have any Fantasy value in 2012?

LeGarrette Blount, RB, Tampa Bay: The addition of RB Doug Martin out of Boise State means Blount will be sitting on passing downs again, and he might lose carries at other times as well. The NFL is becoming a two-back league and Martin will see a ton of time in Year One for Greg Schiano’s offense. The rookie has drawn comparisons to Ray Rice (Schiano’s star RB at Rutgers), and Emmitt Smith, another No. 22 RB.

Ahmad Bradshaw, RB, N.Y. Giants: The Giants had one of the worst rushing attacks in the NFL last season, and RB David Wilson could make a difference there. Bradshaw had bone marrow injections in his feet in February, and he’s still the main back in East Rutherford. But it’s tough to imagine a first-rounder like Wilson not get a chunk of carries.

It’s not easy predicting which players will react good or bad to the incoming rookie class. But it’s usually easier guessing which veterans will be Fantasy Football climbers and fallers, than it is which rookies will dominate.