We made a big deal about going up and putting your players’ stickers up on the board, in many cases, using that sticker to tell people who you just drafted in a dramatic way. Hearing the groans (or the giggles) after you smoothed out that sticker on the board and said his name just made the draft that much more emotional.

But now, we’ve evolved into a situation where we want a little more out of our draft boards. They’ve stayed the same for about a decade now, and we want some improvements.

Over at SoCalledFantasyExperts.com, they came through for you with a $5-off coupon off a premium draft board for those that use the code: “gonos5”!

5 Things That Suck About Your Old Fantasy Football Draft Boards

Let me list off some pain points from the old, standard Fantasy Football draft boards you used to get:

What’s the best way to fix all of those problems? Well, I’m glad you asked.

The guys at FantasySports.org have come up with some pretty awesome customizable Fantasy Football Draft Boards. I’m going to explain the costs backward, rather than tell you what the initial cost is and then build up to the end with the add-ons. 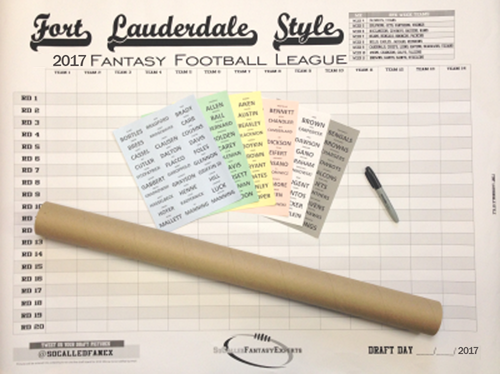 But first, understand that each purchase comes with:

A Draft Board with your choice of three different fonts (Basic, Old School or Team Spirit (pictured))

For $45 (before shipping and before your coupon code), you’ll get a customized Fantasy Football draft board with all of the above – and –:

If you don’t care to have your league name printed on the draft board, then you can pay $30 (before shipping), and get everything else for $31, shipped, with coupon code.

That would be a basic draft board where you can just write in the league name and team names, etc. It will still come with the 400-plus player stickers, and the NFL bye weeks listed.

Taking Your League to the Next Level!

Getting these customized Fantasy Football draft boards will make your draft parties a little more special – and you’ll have a shipping tube to store your draft board for years to come. Break them out at every draft in the coming years, making fun of the guy that drafted a fullback in the sixth round! This is guaranteed to make your draft an even better experience every year!