Checking the 2013 Fantasy Football Rookie RB Rankings is always a good idea, especially throughout training camp. Unfortunately, most Fantasy Football owners will be looking for a player like Doug Martin and Trent Richardson, only to be disappointed they took a rookie runner higher than the third round in their draft.

It’s true, last year’s rookie class ranked among the best ever, with Martin, Richardson, and Alfred Morris ranking among the best rookie RBs in the past 20 years.

Robert Griffin III, Andrew Luck and Russell Wilson played so well as rookie quarterbacks, the Class of 2012 has to be considered the best rookie class for Fantasy Football in NFL history!

Before we look forward to the 2013 Fantasy Football Rookie RB Rankings, we should first look back at recent years – and some not-so-recent years.

First, I want to compare the ADP (Average Draft Position) with Fantasy Football points. Below is a list of the highest drafted rookie RB in each season (dating back to 2002) and the eventual highest scoring rookie RB from that season.

The players in bold indicate the highest rookie running back drafted ended up being the highest-scoring rookie RB in Fantasy that season.The ADP numbers were taken from MyFantasyLeague.com.

Last year, we saw Richardson go very high in drafts (close to the first round late in the summer, as other running backs were injured). The Browns rookie had a great season (204 Fantasy points), scoring enough points in his first season to land among the top 10 rookie RBs over the past 11 years. But even so, he was only the third-best rookie running back from 2012. Both Martin and Morris scored more Fantasy points.

So as we prepare for this season, and you peruse these 2013 Fantasy Football Rookie RB Rankings, remember that the player most of us deem to be the best first-year Fantasy running back ends up being the top rookie RB less than 40 percent of the time.

With all of that knowledge above, you might be ready to leap into the deep end of the rookie running back pool. Unfortunately, this running back class looks like it could be one of the worst ones in the past couple decades. As a matter of fact, there was not one running back drafted in the first round of the NFL Draft for the first time in 50 years. Of the ones drafted, only a couple of them are considered three-down backs that could have starting jobs to begin the season. And even then, they have to battle past some decent veterans.

We ranked the 2013 Rookie QB Rankings earlier this week for your enjoyment.

With Steelers offensive coordinator calling the Michigan State product a three-down back, he has to get the nod for the top spot among rookie running backs (as well as the top spot among Fantasy Football rookies for 2013). The easy comparison for Bell is to The Bus, Jerome Bettis. Bell only has to beat out Jonathan Dwyer, Isaac Redman and La’Rod Stephens-Howling.

ESPN Stats & Information had Bell gaining 921 yards after contact last season. Unfortunately, as KC Joyner points out, he didn’t do as well against better defenses, which he’ll be facing in the NFL. He’ll likely get snatched up in the third or fourth rounds of your draft, but that’s a pretty big price for rookie. 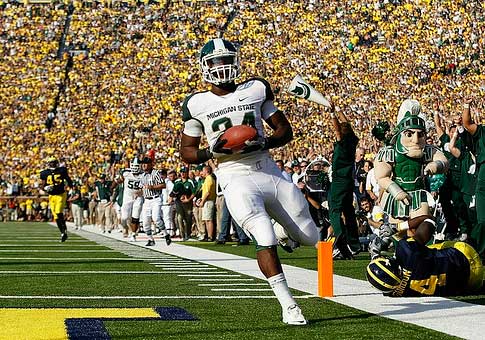 Ball had a chance to be taken in the first couple rounds last year, but chose to return for his senior year. As a junior at Wisconsin (with Russell Wilson at QB), he tied Barry Sanders’ NCAA record of 39 total touchdowns. His senior year was disappointing.

In a relatively surprising move, the Broncos went for a three-down back in Wisconsin’s Ball, rather than a complement to the speedy Ronnie Hillman that they drafted last season. If Ball wins the starting job (he’ll need to pass protect MUCH better than Hillman did), he’ll face defenses structured to stop the pass pretty much the entire game. Fantasy owners should pick up the Ball and run with it (patent pending) in the fourth or fifth round as an RB2 or RB3.

I initially had Lacy as the leader of the RBs among the Fantasy Football rookies for 2013. But as reports come out that his toe surgery from a few months ago, and his general attitude, scared some owners off, I’m dialing down my expectations, too. Plus, the Packers selected Johnathan Franklin a little later. If that doesn’t make you think about last year’s Isiah Pead-Daryl Richardson situation in St. Louis, nothing will.

Alabama produced the first running back drafted in both the 2011 and 2012 NFL Drafts (Mark Ingram and Richardson), and Lacy was nearly the third. His power back ability in college says a lot, but a sore hamstring and below average workouts knocked him out of the first round. The guys at WalterFootball.com compare him to Frank Gore. I like! Packers RB Eddie Lacy was nearly the third consecutive Alabama running back to be the first one picked on Draft Day. Photo Credit: AKmcAfee9

At just 5-foot-8, Bernard offers a speedy option for the Bengals’ backfield to go along with BJGE. He averaged 6.7 yards per carry last season, and the former St. Thomas Aquinas (Fort Lauderdale) star has good hands in the receiving game, too. Fantasy owners will be hoping for the next Doug Martin.

Sure, the Rams only spent a fifth-round pick on Stacy in the 2013 NFL Draft, but that still says something about their feelings about Pead and Richardson. Stacy is adept in the passing game, catching 46 passes last season at Vanderbilt, making him a very nice mid-to-late-round pick option. The Rams also added playmaker Tavon Austin, so they are focused on turning this offense into more than just QB Sam Bradford’s big arm.

Ellington drew comparisons to C.J. Spiller, and not just because of his Clemson colors. He has great speed and cutting ability, but the Cardinals already have Mendenhall and Ryan Williams. New head coach Bruce Arians has made it clear he does not like a running-back-by-committee approach, so once a winner at this position is named, consider that player an RB2/RB3 in Fantasy.

Ellington should be excellent in PPR leagues, also. While he doesn’t have Spiller’s elusiveness, he definitely has a ton of speed, but the early part of his NFL career will likely be sharing time. Once he proves he’s big enough to carry the load, then Fantasy owners will look at him as more than a sleeper pick. Had Lacy not been selected ahead of him at Green Bay, Franklin could have been considered a top-three Fantasy Football rookie running back. He has speed to spare and should still get a lot of touches on an offense that’s on the field a lot. Franklin was a rising star at the right time and he w as one of the fastest backs in the draft, earning the nickname “Jetski,” because he left defenders in his wake. His pass-catching ability should keep Fantasy owners interested – especially in PPR leagues.

CBS’ Jason La Canfora figured Franklin would be the first running back taken off the board, but instead, he joins Lacy in Green Bay to form a studly rookie backfield. Handcuffing Lacy to Franklin with one of your later picks doesn’t sound like a crazy idea.

Obviously, DeMarco Murray remains the top tailback in Dallas, but Fantasy owners should consider Randle the player to grab as a handcuff as a late-round pick. Considering how much time Murray spends in the trainer’s room, Randle should see plenty of touches.

Michael lands on a team with Marshawn Lynch entrenched as a top-10 starter at his position, and sophomore RB Robert Turbin, who played well in 2012. This could be a player we hear more from in a couple seasons, but not because he’s not talented now.

The Dolphins have made it clear – they’re not big fans of Daniel Thomas. Former Canes RB Lamar Miller will take over as the team’s starter, with Reggie Bush now in Motown, and the South Florida media loves Miller. I haven’t really seen enough to anoint him just yet. Many have deemed Gillislee a backup at best in the NFL. But let’s look at the facts — he has good speed, good cutting ability, decent size, good hands and can block on blitzes. That’s a better scorecard than 15 percent of the starting tailbacks in the league right now! Since Dolphins RB Mike Gillislee had to wait his turn in Florida’s offense, he’s one of the few rookie RBs with very little mileage. Photo Credit: KimandMike

The Chiefs won’t bring back Peyton Hillis, so Davis has a chance to work as Jamaal Charles’ backup. He’ll have to beat out Shaun Draughn first. The Chiefs also drafted rookie Braden Wilson to serve as a lead blocker at times.

Lattimore tore his ACL in his left knee a few years ago, only to outdo that one by tearing his ACL, LCL and PCL, and dislocating his right knee last fall. Before the injury, he was projected to be one of the best Fantasy Football rookie running backs of 2013. But he would need an Adrian Peterson-like recovery times three if he was going to make much Fantasy noise this year.

By the looks of this year’s running backs class, Lattimore could still be the best Fantasy running back — eventually. And he’ll get to learn behind Frank Gore, a running back that came back from two major knee injuries during his college career at Miami.

Niners RB Marcus Lattimore was expected to be the first running back drafted — until he tore three ligaments and dislocated his knee. Photo Credit: Daaka2

Wilson weighs in at 251 pounds and he will do some damage at the point of attack, as he opens up holes for Jamaal Charles and fellow rookie Knile Davis.

The Redskins add another young running back to their roster for the third year in a row, behind Morris last year and Roy Helu and Evan Royster in the previous season. This is Morris’ team, and all of these other RBs are going to have  a tough time seeing carries unless the sophomore gets hurt.

Don’t forget to check out our 2013 Rookie QB Rankings that we did earlier. We’ll be updating these 2013 Fantasy Football Rookie RB Rankings throughout the offseason, so stay tuned.