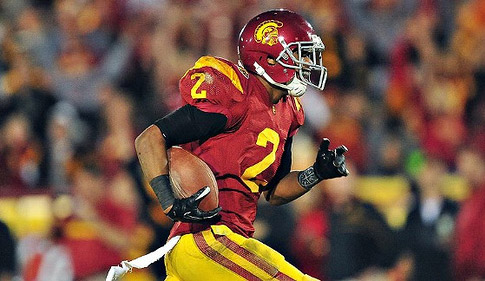 The 2013 Fantasy Football Rookie WR Rankings aren’t exciting and spectacular, filled with superstar college wide receivers like we had in recent years. In 2012, we were all atwitter over the arrival of Oklahoma State wide receiver Justin Blackmon joining Jacksonville. And the year before that, we had Georgia’s A.J. Green having us drool with anticipation.

But we were let down a bit in 2012, with no wide receiver catching more than 70 passes or 1,000 yards. Colts rookie WR T.Y. Hilton was the top dog puppy, but mostly because he caught seven touchdown passes from Andrew Luck.

While there were just three rookies among the top 50 wide receivers in Fantasy Football by season’s end, it wasn’t that bad of a season overall for this class.

To get a little perspective on rookie wide receivers, we looked back at the past 22 seasons to see how many rookies stood out in each year. Notice that Kendall Wright, considered one of the top rookie wide receivers entering the 2012 season, didn’t catch 70 passes, or reach 700 receiving yards or catch seven touchdown passes.

(Only the wide receivers with at least 70 catches OR 1,000 yards or 7 touchdown catches are shown.)

While this is the consensus No. 1 rookie wide receiver in most Fantasy circles, he barely gets that grade from me. While he’s obviously dynamic, with the ability to score from wherever, it’s tough to envision him becoming the next great receiver in the mold of Wes Welker, Danny Amendola and Percy Harvin right out of the gate. The Rams plan to use him as a receiver, out of the backfield and in the return game, but he’s essentially their only weapon right now. Think DeSean Jackson with little help around him.

I’d expect a handful of weeks with 160 rushing and receiving yards, and then a few weeks with 18 yards. He’s a mid-round gamble as a WR3 right now – around the time you’d take someone like Tampa Bay’s Mike Williams or San Diego’s Danario Alexander. The Rams moved up to draft Austin, and nobody’s happier than QB Sam Bradford, who lost Amendola and Steven Jackson this offseason. Who was happier with the Texans’ first-round pick: QB Matt Schaub or WR Andre Johnson? It’s interesting that head coach Gary Kubiak compared Hopkins to former Broncos WR Rod Smith. He’ll line up almost immediately across the field from Johnson, and serve as his protégé, as he tries to take some defensive attention away from the Hurricanes product.

Interestingly enough, former Canes WR Reggie Wayne did a similar thing when he came up across from Marvin Harrison with Indianapolis. Unfortunately, Schaub is no Peyton Manning. But this offense will be strong enough to get Hopkins a ton of passes – and more than a handful of touchdowns.

Patterson played just one season of Division I football with Tennessee, so it’s understood that he’s a project that should need some time to learn his craft at the professional level. He has prototypical size, and he only has to beat out Jerome Simpson for a starting job, but the Vikings don’t have an above average quarterback in Christian Ponder.

NFL.com compares him to Demaryius Thomas, which is interesting for sure, but will certainly get Fantasy owners more excited than they should be for his rookie season. By season’s end, he’ll start on the other side from Greg Jennings, but Fantasy owners shouldn’t risk even a middle-round pick on him.

Woods steps into a poor man’s comparison of what Hopkins will be going through. Stevie Johnson is no Andre Johnson, and the Bills QB could be Kevin Kolb or rookie E.J. Manuel (likely the latter, sooner than later).

The USC product will try to succeed in taking away attention from Johnson in the passing game. The fall-off from Patterson to Woods in rookie WR rankings is considerable. This is a second tier of players we’re getting into now. Woods could be one of the most productive rookie WRs from a Fantasy perspective, but mostly because he’ll get so much work right out of the gate.

Allen is coming back from a knee injury in October, but he is a great talent that had him going in the first round of many NFL mock drafts last fall. He has good size, and a very good quarterback throwing to him. It doesn’t hurt that Robert Meachem was a total free-agent bust a season ago.

This offseason, the Patriots have lost 84-percent of the targets from 2012. Gone are Wes Welker, Aaron Hernandez, Danny Woodhead and Brandon Lloyd. And Rob Gronkowski is a serious injury risk and he might not start the season in pads. So QB Tom Brady will most likely have to use this rookie wide receiver out of Marshall. Dobson is big and fast, and he has a great chance of starting across from Danny Amendola, who has been known to miss a few games a year also. Dobson’s second half could be HUGE, once he learns the offense and Brady learns to trust him. Watch him on the waiver wire early in the year.

They not only have to replace Wallace’s production, but TE Heath Miller (knee) might not be ready to start the season either.

Note: Buffalo’s DaRick Rogers should be ranked 12th in this list, but the rankings tool wouldn’t permit it. Check back over the next few months, as we’ll be updating these 2013 Fantasy Football Rookie WR Rankings throughout the offseason.