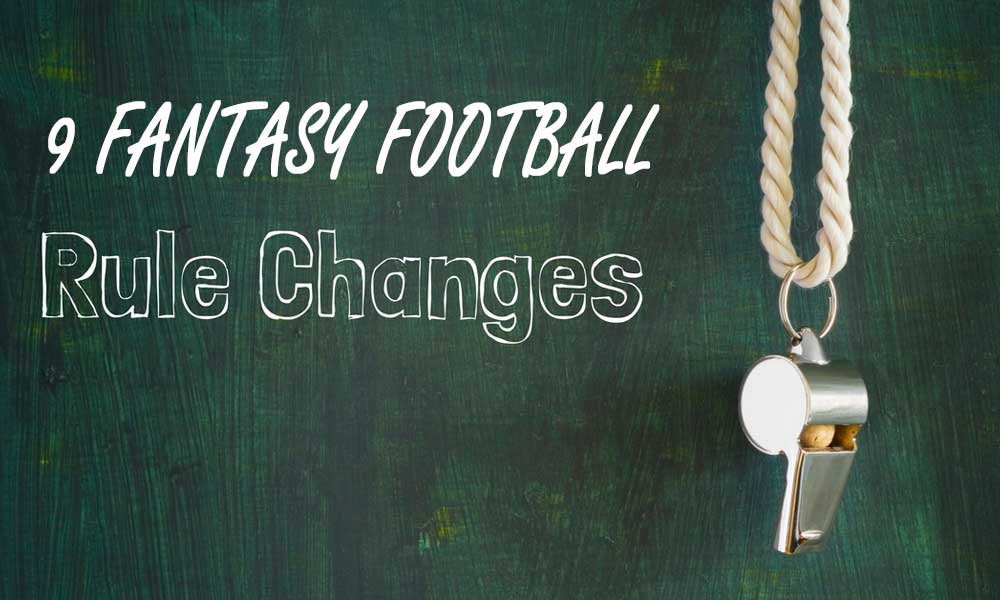 We’ve been tracking great Fantasy Football league ideas for several years now, with the full list exceeding 40 great new Fantasy Football rules, but we’ve handpicked a couple handfuls that are specifically for the overall setup of your league.

These Fantasy Football rule ideas are more about the overall structure of your league.

We’ll be updating this page, as well as posting new articles with fully fleshed out Fantasy Football rule ideas for other parts of Fantasy leagues, like scoring changes, scheduling, lineup and waiver ideas, how to come up with your Fantasy draft order, lottery ideas, dynasty and keeper league rule changes and even Fantasy Football playoffs rules to consider.

My 19-year fantasy football league has been legislating rules changes for two hours in the pizza spot we all went to after high school baseball games. The holidays can be great.

Please post your ideas for great Fantasy Football rule changes commissioners should consider in the comments section below! Our readers want to hear about them!

As I mentioned, these Fantasy rule changes aren’t scoring rule ideas or draft ideas, but they consist of ideas I’ve considered or used in other leagues over the past 28 years.

This new Fantasy rule idea gets the commissioner off the hook from all your league’s complaints! If the league helps choose three people to serve as a “Commissioner Committee,” then they can break up the league duties for a few reasons. First, it alleviates all the work from landing on one person. Second, in a 12-team league, it now allows for one-fourth of the league to be much more in-tuned into how the league is being run, as opposed to just the one commissioner playing papa. Third, separate duties allow those people to concentrate fully on making sure those duties are done to the utmost of their ability. And fourth, the power is spread out a little bit, and owners don’t have to fear the commish is up to something no good.

The league’s owners should make sure they vote for three owners they know are fully committed to the league, and not half-in and half-out. You likely know which types of owners I’m talking about.

I’m in a softball team league with former co-workers and friends from CBSSports.com, dating back almost a decade now. Here’s how we broke up the duties:

A Commissioner Committee handles every trade, making sure they aren’t sketchy trades or too one-sided, and they work to come up with new Fantasy Football rules to fix whatever travesty happened last year (there’s always one!).

Note: There should be one or two alternate members for this committee – maybe people who normally would’ve been great commissioners but are limited by time – who can stand in on trade votes if one or two of the committee members are involved in a trade.

2. Come Up With a Fantasy Football Theme

Whether your league revolves around an awesome TV show, a great movie franchise, or whatever, having a theme helps add an interesting flare. For instance, you can ask all the owners to name their teams off something based on whatever theme you choose. I’ve been involved in leagues with themes surrounding “Seinfeld,” the mafia, Disney characters, and more. Here are a few Fantasy Football league theme options you might love:

Name your divisions after your theme and make sure you come up with a cool trophy name for your league’s champion!

I wrote a full article about coming up with different Fantasy Football league themes here.

While I’m not a huge fan of this one, we do use it in one of my keeper leagues because the rest of the guys seem to like it. The way it works is – our keeper league allows you to hold over two players from one year to the next. If you win the championship that season, you’re only allowed to keep ONE player the following season. Imagine if you had Todd Gurley as a keeper, and you also ended up with Kareem Hunt last season, and you won the championship. This makes it so you can’t have both keepers going forward, but you don’t care as much because you did just win a title!

4. Give Early Payers a Discount – and Give Late Payers a Penalty

One major problem every season for league commissioners seems to be getting everyone to pay on time. This rule helps you get the money early! I like those types of Fantasy Football rule ideas!

In other words, if your league fees are $100, then the first six owners to pay only have to pay $90, the next three still pay $100, but then the final three owners have to pay $120! The end result is still the same, with the same kitty for the league winnings to come from. This also incentivizes and rewards those that pay early, and if others want to pay late, they can, but they’ll have to pay extra – like a late fee!

This generally only works for dynasty and keeper leagues, for the record. Think about how the World Cup works in soccer – a tournament is held every four years. So, for Fantasy Football, you can have each team pay 125% of their league fees every season, with the same normal payouts for three consecutive years. But in the fourth year, all of those extra league fees get poured into the kitty, and that fourth year’s championship is a battle for twice as much money!

This changes keeper strategies somewhat, as some will make plans based on that one big payout, whereas others might take advantage of everyone aiming for Year 4, and try to win this year instead.

6. Move New Owners In With Relegation – and Bad Owners Out

Speaking of the World Cup and soccer, how about using the relegation system that soccer teams use in Europe? First, let me paint a picture for you:

Your league has some owners that regularly stink the place up, but they’ve been in it so long, you can’t just kick them out. You’d like to make your league more competitive, and you have several friends that know Fantasy who are dying to get into your league!

Start a second league, even if it’s just with six or eight teams. This is your minor league. The top two teams that make it to the championship game in that league get bumped up to the major league the following year. They’ll replace the two teams with the worst records from the major league – who now get relegated down to the minors for the next season!

Plus, those league owners who get bumped down don’t even get to vote on your new Fantasy Football rules for next year!

What’s more frustrating than having the absolute best Fantasy team during the 13-week regular season, crushing everyone in your wake, only to get knocked out of the league’s semifinals because your studs had one bad week? It’s brutal – and un-American! So let’s reward the regular season champion, possibly giving him back his league fees at least.

If you play on CBS Sports or MyFantasyLeague, your draft results and league records are already kept – at least dating back 10 years or so. But you should even take it a little further and share the owner records of all the voting, too. Wouldn’t it be interesting to see that one guy always seems to be the “Unluckiest Owner of the Year,” or one smart owner always ends up picking the “Rookie of the Year,” or making the “Pickup of the Year”?