I have some theories as to why that is, and I shared them previously in our 2017 Tight End Rankings, but I can touch on them again here.

In football, a tight end is usually a player with the size of a defensive end and the agility of a wide receiver (both of those traits are shadows of NFL-caliber ends and receivers, but you get the point). So we’re talking about skilled big men, able to fly down the field, leap and catch passed balls, break through defensive lines and do battle with linebackers and strong safeties. They are asked to do three things very well: block, catch and break tackles.

My comparison for them is in another sport: a catcher in baseball. Catchers have to do three things well, too: handle pitchers, play great defense and hit the ball. A good Fantasy catcher and a good Fantasy tight end are able to do all three things really well, helping them become Fantasy beasts! (Good blocking (tight ends) and good defense (catchers) keeps them on the field as much as possible, giving them more opportunities.

Tight End Stardom is Not Wasted on the Youth

Since tight ends are asked to do more, both physically and overall, they seem to be one of the latest maturing players in the game, outside of quarterbacks.

It’s much more common to see a bigger boost in production in a tight end’s second year compared to his first than sophomores at other skilled positions.

We’ve heard all about how this crop of rookie tight ends ranks among one of the best in a while, but let’s put that in perspective. There has been just one rookie tight end since 2011 that has posted a top-12 Fantasy effort at the position (Hunter Henry, 2016). Outside of Henry and 2016, the highest a rookie tight end has finished, on average since 2011, is 25th – and that includes Tim Wright’s 13th-place finish in 2013. Over the past 10 seasons, the top rookie tight end averaged 43 catches, 462 receiving yards and 3.5 touchdown catches, which would give him about 65 Fantasy points.

The lesson learned: If you’re looking for a sleeper tight end this season, you’re probably better off rolling the dice on the Falcons’ Austin Hooper or Rams’ Tyler Higbee, than betting on the 2017 rookies.

These are the highest-scoring rookie tight ends in non-PPR Fantasy Football leagues since 1996.

Here are the other articles/rankings of the “Best Rookies Ever” position series:

Thoughts on the Top Fantasy Rookie Tight Ends since 1996

A few interesting things to glean from those rookie tight end stats from the past 20 seasons: 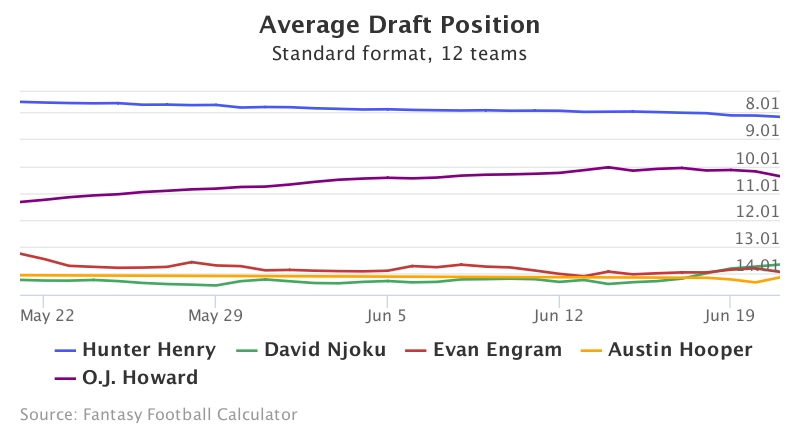 Here are my other articles/rankings of the “Best Rookies Ever” position series:

The best Fantasy Football rookie Tight Ends ever should give you some reasonable expectations to set for the 2017 Fantasy Tight end rookie class. In other words, proceed with caution!