Before we get into the best Fantasy Football rookie wide receivers ever, we should take a quick look back at the 2016 class of rookie receivers, and then look ahead to my 2017 Rookie Wide Receiver Rankings.

We have a lot to get to!

In the past few seasons, we’ve seen the wide receivers position grow in importance in Fantasy Football, as the NFL continues to evolve into a vertical game more than a ground game. Looking at the top 25 single-season passing performances, there were just six that weren’t from the 2010s decade, and nine of them came in the past three seasons! From a single-season receiving perspective, nine of the top-25 performances came in the 2010s, with no one entering that group from 2016.

The passing game is utilizing tight ends and running backs more and more, along with second and third wide receivers on an NFL team. That doesn’t mean there aren’t great players, it just means our opinion of how many there are is skewed because we see the high passing yardage.

What About the Rookie Wide Receivers?

I’ve been updating an article about the history of rookie wide receivers (since 1990) that either caught 70 passes, posted 700 receiving yards or caught seven touchdown passes. Why was seven such a prevalent number? No idea. But it really did separate the best rookie wide receivers from the rest of the first-year pack each season.

In this article, we’re going to list the Top 25 Fantasy Rookie Wide Receivers Ever (since 1990), share the all-time best class of rookie wide receivers (hint: you already know the answer), and I’ll give you my Top-12 2017 Rookie Wide Receivers Rankings. But first, I would like you to look at the inordinate amount of rookie WRs from the past few years that are near the top of this best ever list.

There are a few reasons why rookie wideouts have become more valuable in Fantasy Football, and it really has nothing to do with the evolution of scoring systems (PPR, 3-WR lineups, etc.). It likely has more to do with how much money teams invest in rookies, making it important that they become assets on the field sooner than later.

It also has to do with college offenses becoming more pro-ready, and NFL offenses dumbing down just a bit. I think that’s also why rookie quarterbacks have seen more success in recent years — but then struggle soon after defenses adjust.

Some observations about the best fantasy football rookie wide receivers ever … since 1990:

With all of the above information, mixed with the results of looking at the history of rookie wide receivers, we came up with the five best rookie wideout classes since 1990.

Remember, this is off an article I’ve been updating for years, pointing out the rookie wide receivers that caught 70 passes, 700-yards worth of passes or seven touchdown passes. 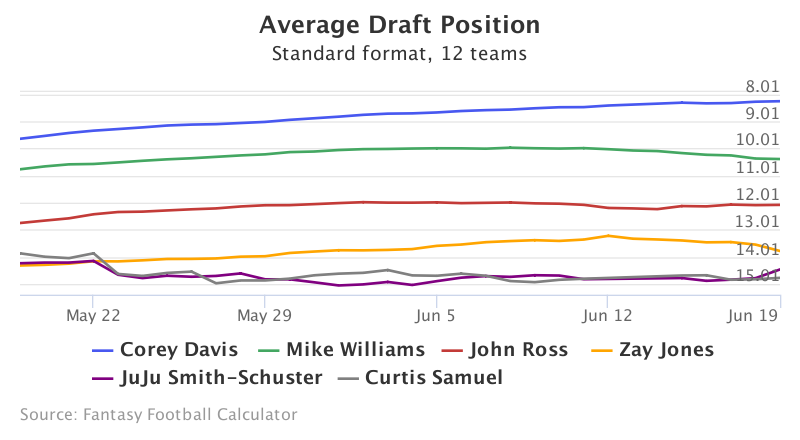 Now that we can step back and look at the rookie classes from a wide-angle lens, we see that an average of a couple wide receivers every season can break through to be top-25 Fantasy wideouts. But note how the rookie wide receivers everyone expected to dominate didn’t always do so. From Sammy Watkins to Corey Coleman to DeAndre Hopkins and Tavon Austin, the top rookie wideouts commonly end up not being the best in Fantasy points.

With that said, Amari Cooper came through as the top rookie WR in 2015, and he was the highest-drafted of that class. But he’s the exception to the rule.

It remains to be seen how the 2017 Rookie Wide Receivers class will shape up, and to be honest, things don’t look that good midsummer before preseason.

Will we see Corey Davis, Mike Williams or John Ross rank among the best Fantasy Football rookie Wide receivers ever? It’s doubtful for now, but things can change!

Check out our other “Best Fantasy Rookies Ever” posts about other positions:

This list of the best Fantasy Football rookie wide receivers ever and our 2017 Rookie Wide Receiver rankings work together to help Fantasy Football owners understand that it’s very difficult for a rookie wideout to make a major impact on your team – even in this heavy passing day and age.