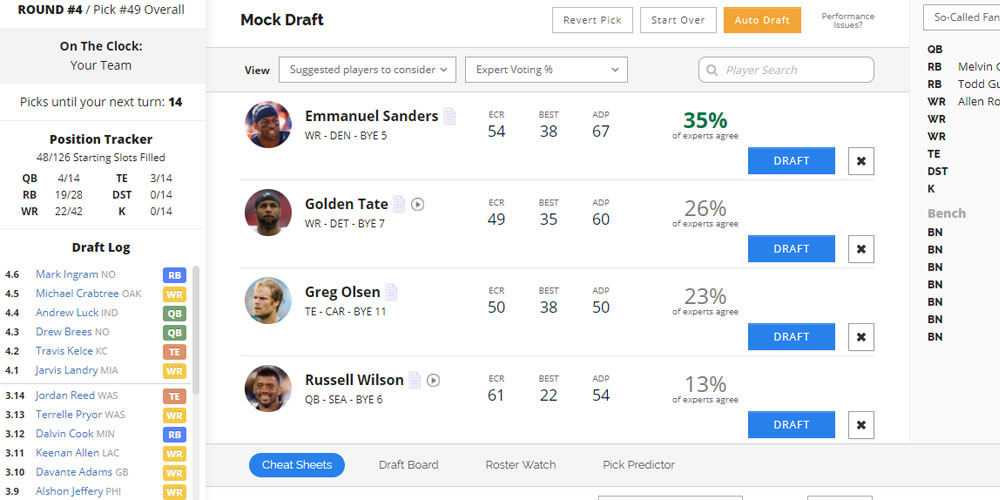 Before I start sharing my thoughts on the FantasyPros Draft Wizard, I first want to explain that I don’t called things “the greatest ever” often. So when I call this site the “greatest Fantasy Football draft assistant ever created,” I want you to know that it’s not hyperbole.

As a matter of fact, there’s not a Fantasy Football draft assistant tool that even comes close.

I’ve been using the Draft Wizard since 2013, and because I’m in a dozen or so drafts every year, the rules, scoring formats and keepers are oftentimes too much to keep up with, especially when you include the mock drafts I’m in every year. So this works great for the multi-league owner (you can load up leagues from CBS, ESPN, Yahoo!, MyFantasyLeague and RTSports).

I’m going to go through all of the benefits of each of the individual features for this Fantasy Football draft tool. I think you’ll agree that it’s worth the price – and that no other Fantasy tool is as powerful.

There are actually several parts to this Fantasy Football draft assistant, so I’ll break each featured down, with explanations of their benefits. For those that might not realize, FantasyPros.com is a place where dozens of Fantasy Football experts from around the country submit their Fantasy rankings. Those rankings are then collated and averaged out to create their “Experts Consensus Rankings,” which is valuable all on itself.

This is basically their mock draft simulator tool, which, as they explain, “is an efficient way to practice for your draft. It’s similar to doing a live mock draft except that you’re drafting against our computer algorithm (which uses a random selection of expert cheat sheets and ADP sources).” (Separately, I already rank this as one of my Top 50 FREE Fantasy Football Draft Tools!)

Once you “Start Drafting,” it will ask you to load your league’s configurations, like how many teams are in your league, which draft pick you’ll be selecting from in Round 1, what type of scoring system and which roster positions your league uses. Finally, you will choose which rankings you’d like to draft against – experts, ADP from various sites, or pre-draft rankings from various sites.

For keeper leagues, you have to create the league and then manually add which keepers have already been held over by which teams. You see? It’s not just telling you random picks that will happen around your pick, it’s figuring out team needs for teams around you and it’s guesstimating who they’ll pick.

Once you launch the mock draft, it begins – unless you have the No. 1 pick, then you have to make a pick to start it. You’ll see four suggestions for your pick, which as it mentioned, are determined by their algorithm and its random selection of experts rankings to use. Each suggested pick shows you the percentage by which experts think you should draft those players (see featured image above).

Your roster, as you make your picks, is filled out on the top right, and you have a cheat sheet based on the “Experts Consensus Rankings” in the middle.

Don’t forget, you can also revert a pick at any time (top-right corner), in case you just want to see how a certain strategy might play out.

Next to the “Cheat Sheets” tab, you’ll see “Draft Board,” which shows you the picks in a grid format. Then there’s a tab called, “Roster Watch,” which shows you how everyone’s lineups are shaping up. The final tab is called, “Pick Predictor,” which tells you the odds of which a player will likely be taken before your next draft pick. In other words, for my fourth-round pick (see image below), it shows that if I don’t take Emmanuel Sanders now, there’s an 84-percent chance he’ll be drafted by another team before my fifth-round pick rolls around. 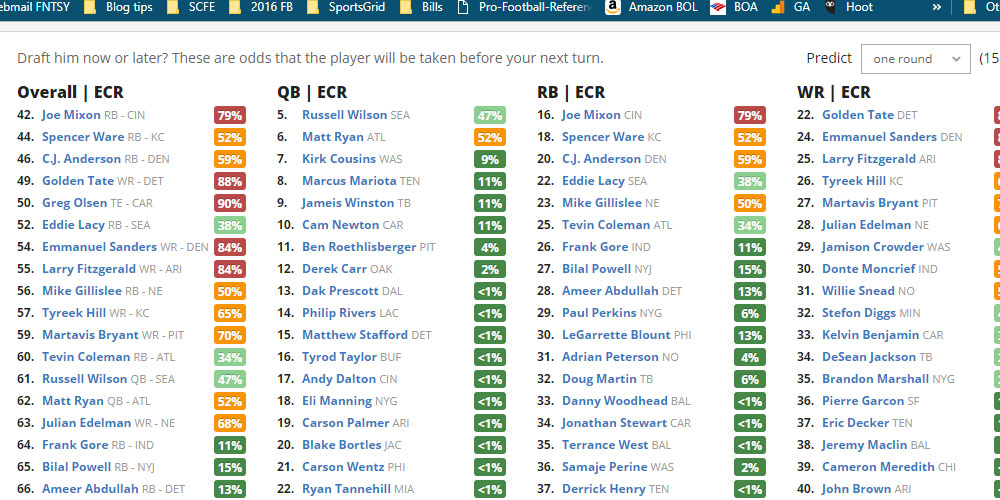 Once that’s done, you can save it as a Cheat Sheet and you’ll be ready to rock for your next auction!

This is THE best Fantasy Draft tool. Period.

You’ll connect your league to this site, and it will basically work alongside your draft as a “draft assistant”!

It will allow you to use all of the features listed above to help you figure out who your favorite writers or websites think you should draft next.

It will connect to your league, and update along with your draft, so you won’t have to do any crossing off or highlighting. That’s stuff your assistant does!

How Much Does the Draft Wizard Cost!?!

Much of what I wrote about above comes for free in the free version of the Draft Wizard. You’ll get to run mock draft simulations for redraft leagues. You’ll also get projected standings for those mock drafts, and you can create cheat sheets with their Cheat Sheet Creator, to print out and use for your drafts.

They have changed their pricing structure, making it a subscription-based application, and it includes the “My Playbook” in-season applications, which help you set lineups and make waiver wire picks! It connects right to your league, reviews rosters and shares with you what players the experts would choose, based on their weekly rankings! Brilliant!

Their new subscription pricing format is actually much better for you. You can pay less than $3 per month (PRO) for limited capabilities for a couple teams, or you can sign up for the $5 per month option (MVP) for up to 10 teams, which opens up the Live Draft Assistant (in my opinion, the most important tool). Finally, there’s the $7.99 per month option (HOF), which is for UNLIMITED teams, and brings in an assortment of Daily Fantasy Sports tools you can use to make that money back!

IMPORTANT: If you also play Fantasy Baseball and/or Fantasy Basketball, the HOF option is the best — you get all of the Draft Assistant tools, all of the in-season lineup and waiver wire tools, and all of the DFS tools for the entire year! You’ll get:

It’s tough to find anything that comes within 100 yards of this Fantasy Football draft assistant. Good luck this drafting season!